Laura Macfehin retrieves some made-for-television goodness from the golden age of TV movies- resurrecting some her childhood faves and pointing fans to some seventies gems.

There was a time when the television set was the central screen in most people’s lives, and broadcast television was what was on it. Before personal computers and streaming and smart phones and downloading—hell before DVD rentals—before VHS!—you came home, switched on the tube and what was on was on was what there was until the end of broadcasting when there was nothing more till morning time.

It was a weird, boring, beautiful form of entertainment—a sort of static filled magic-mirror that as a kid you lay on the floor in front of and waited for whatever cultural artefacts were going to bob up to its surface in front of you. It could be some studio audience sitcom making references to a culture you didn’t fully understand, or a Forties matinee with beautifully lettered title cards or late at night an English horror set where bouffanted ladies in Technicolour negligees ran through Gothic castles.

Things appeared and were gone with broadcast television and there was no way to revisit them or find out how or why they existed. If you tuned in half way through you might not what you were watching until the ad break— sometimes you might never know what it was you just saw and with no context the strange images stayed in your brain and formed their own neural networks.

What I did I just see?

As you grew up there would be conversations that started “did you ever see a movie set on a plane where Captain Kirk was a priest fighting evil druid ghosts?” or “what was that thing we saw once with a house that killed the families who lived there? And Bette Davis was in it? That scared the shit out of me!” Then eventually the internet came along and most of our questions and some of our prayers were answered. 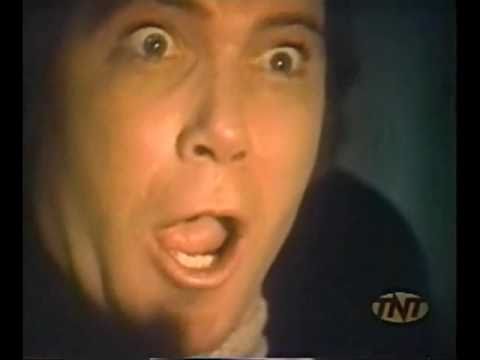 If you could turn back time

Not every thing from your childhood can hold up to adult scrutiny.  Having re-watched MacGyver I speak with bitter experience.  On the other hand sometimes what caught the attention of our half-formed psyches turn out to be even better than we remember.  The Legend of Lizzie Borden was made for television in 1975, but I saw it some time in the eighties, when it confirmed my suspicion that the Victorian era was full of tainted meat, gender inequality and dark parlours containing bludgeoned corpses.  It was released on DVD in 2014 and you can also watch it on YouTube.  Elizabeth Montgomery (everybody’s favourite TV witch) is fantastic as possible axe-murderess Lizzie (who in real life was Montgomery’s sixth cousin!).  Although not a horror as such the film has such a creepy vibe and is so chillingly told it is likely to spook you long after the credits roll.  Be sure and watch the European cut if you can – it is four minutes longer and features essential nudity!

When I was 10 years old I read and re-read the Lois Duncan teen horror Summer of Fear.
It featured a teen witch who inveigles her way into a family and displaces the heroine of the book; stealing her boyfriend and most shockingly- tricking her into sewing an unflattering prom dress!  I was chuffed when I found as an adult that the book had been adapted for the small screen in 1978.  Directed by Wes Craven and starring Linda Blair Stranger In Our House aka Summer of Fear captures all of the weirdness of the book in full seventies fabulousness.  Added bonuses include Fran Drescher (and her voice) in a supporting role and the craziest perm you’ve ever seen on Blair.

Something Evil was one of those films that niggled away at the back of my brain for years.  I didn’t know what it was called, who was in it or much of the plot but that didn’t stop me from trying to track it down.  Luckily then Google came along and all I needed was ‘creepy film with barn’ to tell me what I needed to know.  Something Evil is the second of four television films Steven Spielberg was contracted to direct for Universal.  The first, Duel with Dennis Weaver, has become a cult classic whereas Something Evil doesn’t get a lot of love.  I think that’s a shame because it is a perfectly formed little film- even weirder than I remembered it- with a marvellous Sandy Dennis who I find mesmerising to watch.

The seventies and eighties were a special time for creepy television.  I’ve only mentioned three here and haven’t even gone near the British stuff, but tomes could be written (actually, if they have let me know because I’d love to read them).  The films made had to be safe enough for general viewing and not too budget heavy, which meant filmmakers had to be a lot more creative with their scares.  True, some just replaced the gore you’d get in theatres with histrionics instead, but through the lens of some forty years even the screaming and fainting can have a kitsch appeal.  There are loads more wonderful tv movies out there but tell me — what are your favourites? Or is there something you half remember seeing as a kid that scared the bejesus out of you?  You never know… I might have seen it too!