Love them or hate them– the bra is something most woman wear everyday.  But when did we start doing this, and why?  How old are our bras and why did a garment that can sometimes seem like a torture device actually start off as part of women’s emancipation?  Laura Macfehin looks at bras and traces their sometimes surprising pedigree. 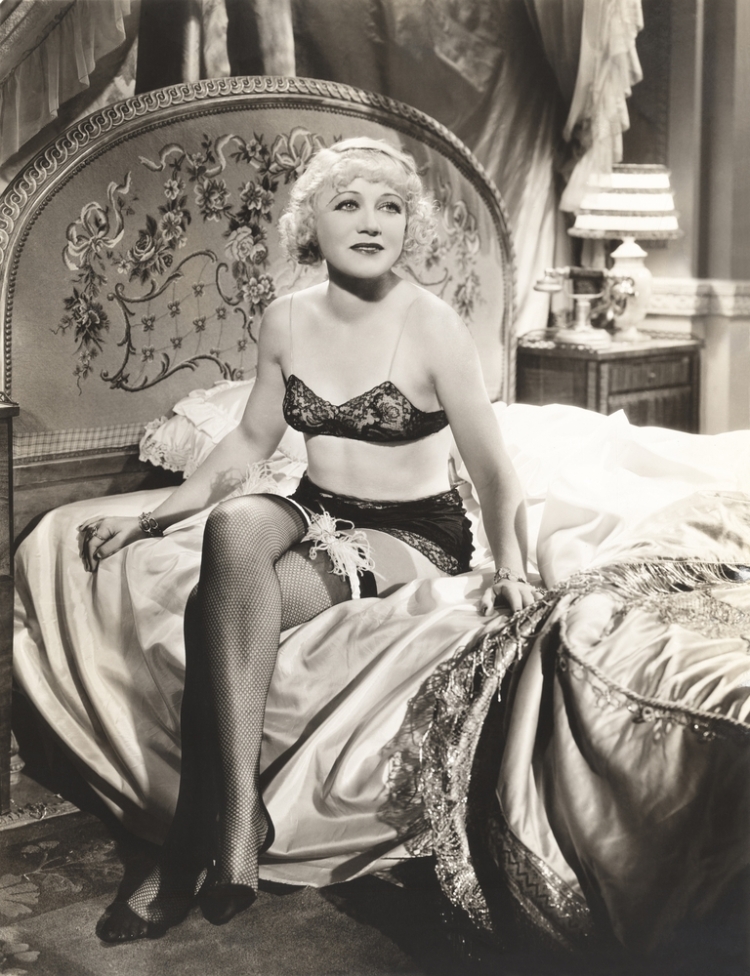 When asking the question “just how old are our bras?” some historians have been tempted back into the ancient world by frescoes showing Roman gals gadding about in breast bands and loincloths. I’m going to cavalierly dismiss this breast get-up (otherwise known as a strophium, fascia, fasciola, taenia, or mamillare) as a forerunner to what we wear now because a) they only really wore them when exercising, and b) it was pretty much just a length of fabric wrapped round to contain the bust while tossing balls about. Greek ladies may have tightened their belts under their busts to prop up their bosoms up but again I don’t think this really counts as a bra-type bra. So due diligence to antiquity done—when did we start wearing bras?

From about the 16th century onwards, it became increasingly the thing to encase oneself in some sort of undergarment that held the body in place and created whatever shape was considered desirable at the time. Corsets changed depending the silhouette that was demanded by fashion at the time and the materials that were available, but they all generally involved boning of some kind and lacing. They were also all in one piece—that is they encompassed everything from the bust down to the waist or hips in one garment.

By the 19th century (after a brief loosening up in the Georgian era) corsets had become marvels of engineering, providing a sort of exoskeleton within which Victorian women lived their heavily prescribed lives. Much has been made (and I think overplayed) of the potential hazards of these garments but it is certainly true that there were women who felt them to be irrational items of clothing that impeded women from living full lives. Although there had been a couple of gentlemen who had acquired patents for garments solely for the support of the breasts these tended to be stupid designs involving inflatable bits or cups made of steel mesh that looked like tea strainers. In 1876 Olivia P. Flynt, of Boston patented a bodice type garment to be worn instead of a corset which was specially adapted to ladies having large busts… thereby enabling beauty of form to be preserved without lacing or otherwise injuriously pressing or binding the body.   Unfortunately her bust improver didn’t take off, although it looks like it would have been quite comfortable.

Herminie Cadolle was a Communard who had taken part in one of the first women’s movements—the Union of Women for the Defence of Paris. During the Paris commune of 1871 she cared for the wounded and became friends with insurrectionist Louise Michel. Afterwards she was imprisoned in Rouen for her role and served six months before being released. She continued her political activities however—becoming treasurer of the Socialist Revolutionary Committee which was set up to support deportees of the Commune. Eventually though there was too much heat on her in Paris and she moved to Argentina—setting up shop in Buenos Aires. It was here that she conceived of her emancipatory undergarment by essentially cutting a corset in half. 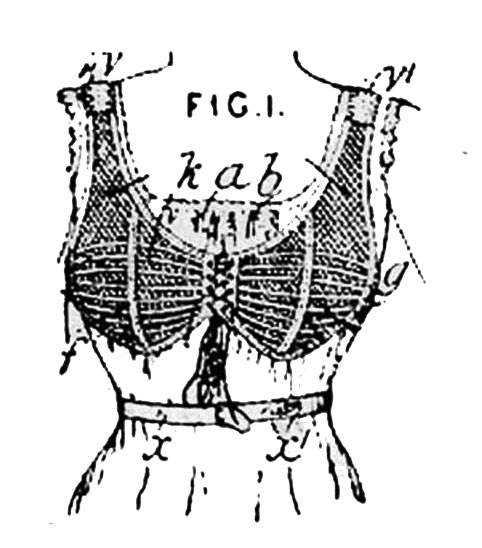 In 1889 Herminie Cadolle exhibited her new design of undergarments at The Great Exhibition. The “soutien-gorge” (literally ‘throat support’) was a two-piece undergarment to replace the corset thereby ending the constriction on a ladies organs. From 1905 she was selling the top half separately and in 1910 she set up the Parisian workshop which she left in the charge of her daughter Marie, and in which successive generations of Cardolle women have continued to produce lingerie. 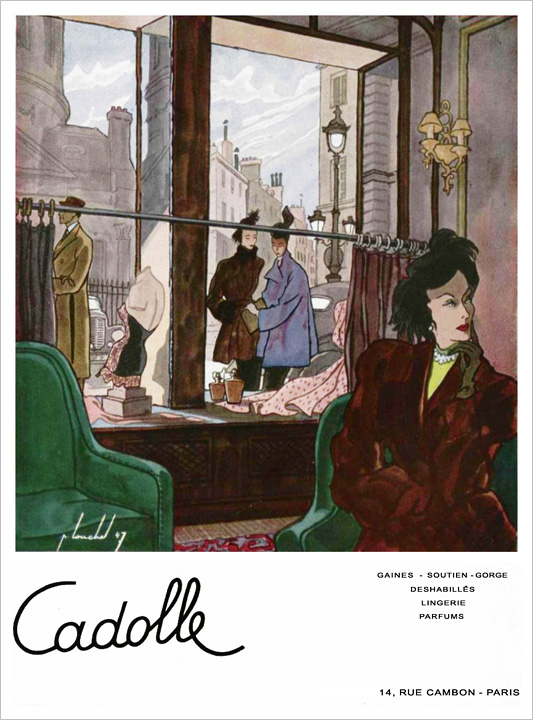 Born Mary Phelps Jacob, Caresse Crosby is often credited as an inventor of the modern bra. She came from a privileged New York family with all that entailed, and so in 1910 found herself a debutante attending balls and generally appearing in society. One night she was dressing herself for a ball in a diaphanous evening gown she had bought several weeks earlier. Unfortunately at this time underwear in New York was not keeping pace with the new sheer fashions, and Crosby found that her regular whalebone corset and super tight corset cover showed at the top of the gown’s plunging neckline, poked through the delicate fabric and turned her ample bust into a mono-boob. Frustrated she called for a couple of hankies and a needle and thread and whipped up a bra that protected her modesty without destroying the dress.

It was an immediate success with many girls requesting she make them one that very night. Crosby patented the ‘backless brassiere’ in 1914, maintaining that it was “well-adapted to women of different size” and was “so efficient that it may be worn by persons engaged in violent exercise like tennis.” I find it hard to imagine a couple of hankies helping me much while playing tennis, but then I am no longer 23. She later formed the Fashion Form Brassiere Company that produced her bras until 1922, when her second husband Harry Crosby, persuaded her to wrap it up and come to Europe with him instead (they didn’t really need the money).  She sold the patent for US$1500 to The Warner Brothers Corset Company who discontinued the style but went on to make over US$15 million dollars over the next three decades.

Crosby would go on to have a very exciting life after bras– with husband Harry she set up Black Sun Press which published ex-pat writers in Paris– people like Hemingway and Lawrence.  After Harry died in scandalous suicide-pact/murder-suicide with a lover (the Crosby’s had had a very open marriage) she continued to run Black Sun Press, published her own poetry, married an alcoholic actor nineteen years her junior, flouted U.S anti-miscegenation laws with a relationship with famous fighter and Broadway Star Canada Lee, founded organisations like ‘Women Against War’ and ‘Citizens of the World’ and ran an artist’s colony in Rome.

Our cups runneth over

At the same time as Crosby was rigging up her hanky bra another New York woman and her husband were working on the next step in the evolution of the modern bra.  Ida Cohen Rosenthal was born in Russia, where she had studied Russian and worked as a seamstress.  When her and her husband William’s Socialist activities began began to draw the hostile attention of the police they decided to emigrate.  At first they settled in Hoboken, where they set up the dressmaking business that they would eventually move to Manhatten.  Here they combined forces with dressmaker Enid Bissett.  In the early 20s the prevailing flapper look called for a boyish chest and most brassieres were simple bandeau type affairs.  Bissett and the Rosenthals found that this did little to flatter many of their customers, so Bissett took one of the bandeaus apart and re-stitched it to better suit a fuller figure.  They tinkered with the design and eventually worked a system of cup sizes to accomodate A, B, C, and D cups.  These bras were originally given to customers as part of a dress purchase, but they became so requested as individual sales that the trio soon started to stock them as stand alone garments.  In 1930 the Maiden Form Brassiere Company was formed.

The cup sizes system proved so successful that other companies such as Warner’s was quick to adopt it, and the four different sizes were nicknamed egg-cup, tea-cup, coffee-cup and challenge-cup!  The Rosenthals continued to run Maidenform (as it became in 1960) which became famous for it’s newspaper and magazine advertising.  The “I dreamed” campaign was thought up by a New York ad-man in 1949 and continued for twenty-one years. 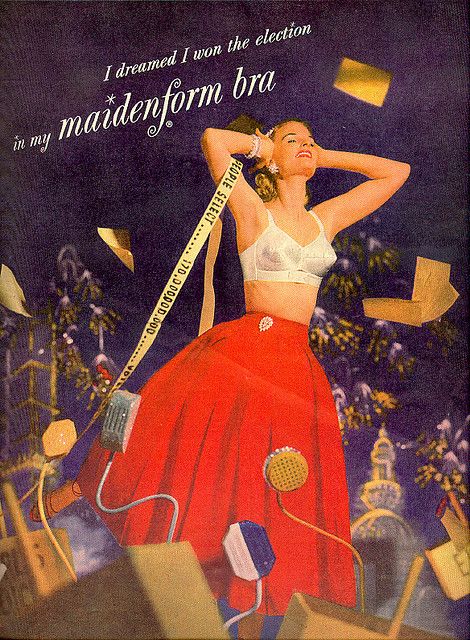 Ida Rosenthal ran the business side of Maidenform from 1930 until her stroke in 1966, traveling to promote their products and taking on a leadership role that was unusual for women at the time.  Today the business is run by her granddaughter Beatrice Coleman.

So that’s about it, right?  Apart from tinkering here and there– the bullet bra, underwires, the push-up–  our modern bras have continued in pretty much the same mould.  Which means we can trace their birth back to around the beginning of the twentieth century.  At least that is what everyone thought.  Then in 2008 some workers who were part of the reconstruction of Castle Lengberg in Nikolsdorf, East Tyrol found a hidden vault containing 2,722 textile fragments.  Among these were four amazingly modern looking bras.

Until this find it was generally believed that medieval women across Europe wore only a chemise beneath their gowns to protect them from the dirt and oil of their medieval bodies.  Archaeologists and historians are still working to discover who might have worn this garments and whether they were part of everyday garb, but it definitely extends the family tree of our modern over-the-shoulder-boulder-holders by about five hundred years!

What are your thoughts on bras?  Love them leave them?  Modern or vintage?  And did you know they were so old?