In this edition of Believe It Or Not Laura Macfehin looks into the strange superstitions surrounding wedding dresses!

I had been a little nervous that the plot might be a bit Pygmalion-ish (which is one of my all time most hated storylines) but it wasn’t, thank goodness.

Instead it was an obsessively beautiful fever dream set inside a fictional and chilly couture house in 1950s London.

There was, obviously, lots of sewing which was great for me, as sewing is one of my favourite things to do/watch/think about.

Wedding dresses play a central role in the story (as they do in real life couture houses), and the couturier, played by Daniel Day-Lewis, tells his new muse of some of the superstitions surrounding them.

In particular he tells of how his terrible nanny wouldn’t help him sew a wedding dress for his mother for fear that she would not then marry herself, and of how young models don’t wish to model them in case they marry a bald man.

These stories got me thinking of some of the weird superstitions I had heard around wedding dresses, a garment that has been loaded up with some fairly heavy symbology over the years. 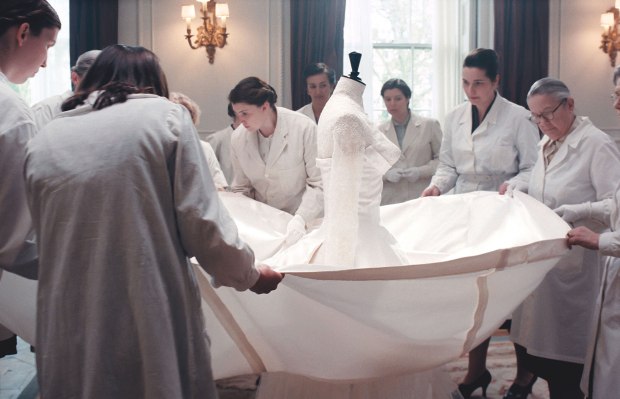 Oh no she didn’t!

First, let us do a little low-key myth-busting.  No- Queen Victoria did not ‘invent’ the white wedding dress as some people put about.  Although she certainly gave it a boost in the popularity stakes white wedding dresses were around before Victoria tied the knot with her cousin Albert (this is just talking about the Western European tradition of bridal wear, because of course Shinto brides have been wearing white for centuries).

She chose white because she wanted to make a feature of the Honiton lace that swathed the otherwise quite subdued satin gown, and support British cottage industries which were suffering at the time. Her gown was hugely influential and the Devon lace-makers certainly benefitted from her choice.

Queen Vic in her wedding dress

She was not the first royal to marry in white.  A couple of decades earlier Princess Charlotte had married in a stunning regency gown of silver and white.

And as many (including historical novelist Loretta Chase here) have pointed out- white wedding dresses were already quite in vogue; as these ladies magazine fashion plates from the 1830s demonstrate. 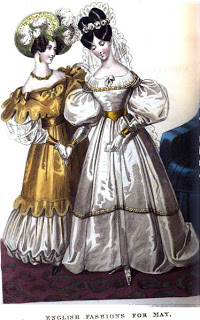 Which brings us to our second bit of myth-busting (or perhaps it is more like myth-tweaking? Anyway).  And that is addressing the idea that the symbolism of white as equalling chastity is an ancient one.  The reason aristocracy (and those wealthy enough to imitate them) had traditionally chosen white was because it is so impractical.  Most women throughout history (and even up until the end of the 1940s) married in their ‘best’ frock.

Even if they had a new dress or suit for the occasion (and sometimes employers would foot the bill or provide a hand-me-down of good quality) it was generally expected by most women that they would get more than one days wear out of their wedding outfit.

In the days before dry cleaners a white silk gown was the height of luxury, because it said to the observer I can afford to wear something new that I never expect to wear again.

Historically blue had been the colour that signalled ‘purity’ and innocence-hence Our Lady’s blue garb.  The Late Victorians (wouldn’t you know it) were the ones who got caught up on the virginal brides thing and made the link between chastity and wearing white.

Certainly until the 1950s it remained common to marry in whatever colour you fancied (within some limits as we will see).

It perhaps not a surprise that in the 1950s, a time when both consumerism and gender conformity both spiked, there was a huge uptake on the notion of a white wedding dress as a one-wear garment.

Although marrying in a colour other than white was not unusual, that is not to say the were no superstitions around colour choice!

In Scotland, green was considered so unlucky it was not only banned from the bridal party but also from guests and even wedding decor.  As the following rhyme shows there could be repercussions for brides flighty enough to go with their own taste over folklore.

Married in White, you have chosen right,

Married in Grey, you will go far away,

Married in Black, you will wish yourself back,

Married in Red, you will wish yourself dead,

Married in Green, ashamed to be seen,

Married in Blue, you will always be true,

Married in Pearl, you will live in a whirl,

Married in Yellow, ashamed of your fellow,

Married in Brown, you will live in the town,

Married in Pink, you spirit will sink.

Again this rhyme is obviously part of a western tradition as there were brides in China and elsewhere happily marrying in red for its fortune-bringing properties.
Different fabrics have different superstitious connotations as well.  In most traditions silk is lucky, satin unlucky and velvet will result in poverty!
It is not surprising that so much superstition should surround weddings.  In a time before divorces were attainable and property rights for women largely nil, there was a lot riding on making a decent marriage.  Brides really needed luck to be on their side.

I should be so lucky

This is where some of the weirder superstitions come in.  Although I scream inside to write it, it has long been held lucky in English folklore to find a spider inside your wedding dress (one would hope before the frock goes over your head).  This probably dates back to Roman times– the Romans considered spiders very lucky and used to carry spider charms around with them to aid in business transactions.

In other animal related luck– if a bride should find a cat eating from her left shoe a week before she is married then that is also hugely lucky.  And, you know, really probable without any highly involved orchestration.

Other superstitions built into the choosing and constructing of wedding clothes tend to be more about diverting bad luck.  Much of this is seems to come from people’s paranoia around hubristic displays of good fortune or happiness in public, with a little bit of not counting your chickens thrown in for good measure.

The wedding veil is a good example of this.  Although some point to the veil’s utility in keeping the bride’s face a surprise in arranged marriages, it actually has an older and more talismanic function, which was to ward off the evil eye from jealous onlookers or angry gods.

In the not counting your chickens basket it has been considered unlucky to complete your outfit too far ahead of time.  Ideally the last stitches should be sewn (by the bride’s mother) just before she walks down the aisle.  Some dressmakers still leave a little bit of hem unstitched for this purpose.

When it comes to the construction of wedding dresses there is a whole bevy of superstitions.  Some (possibly dressmakers looking to protect their business) say that it is unlucky for a woman to sew her own wedding dress, and that every stitch she sews will be a tear she sheds in the marriage. 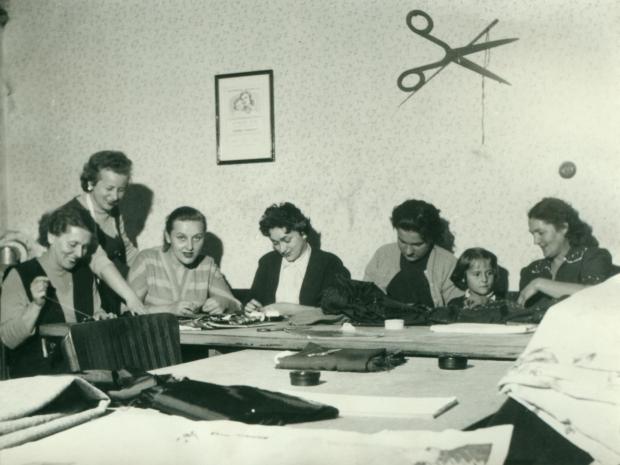 In the seamstress’s workshop

Within the couturier’s workshop there are plenty more superstitions that come into play with the sewing of wedding dresses.  A common one is for unwed seamstresses to sew a hair of their’s into a seam of the dress.  This is meant to ensure they will marry themselves.  Sometimes, to secure the bride’s good luck, they may sew in a hair from the head of seamstress who is happily married.  In other shops they may sew in a good luck charm, like a small cardboard horseshoe or a piece of blue ribbon into the hem or waist stay of a gown.

Once upon a time, long, long ago I myself got married dear reader!  I was lucky enough to have my mother sew my dress for me (she also sewed the dresses for my beautiful best-women) so I avoided the tears that would have come from sewing it myself, but I did sew a red velvet wrap to go around my shoulders.  Perhaps the fact that I was still sewing it the night before the wedding mitigated the terribly unlucky red velvet! 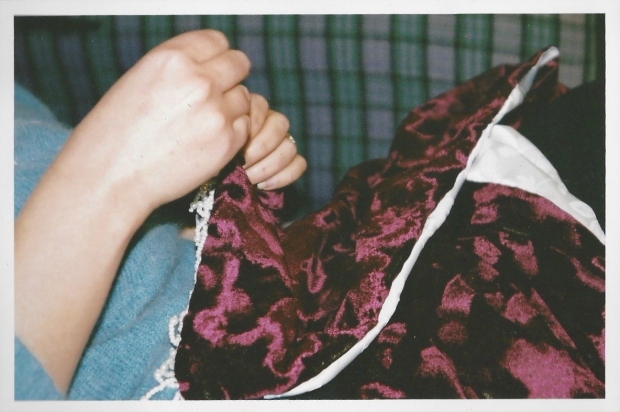 Me sewing my wrap the night before the wedding

So far we’ve stayed married for coming up to eighteen years, so the D.I.Y approach can’t be too unlucky.

My parents and I on my wedding day

How about you?  Did you or would you sew your own wedding dress?  Do you have any family superstitions or cultural traditions around wedding clothes?  I’d love to hear about them!